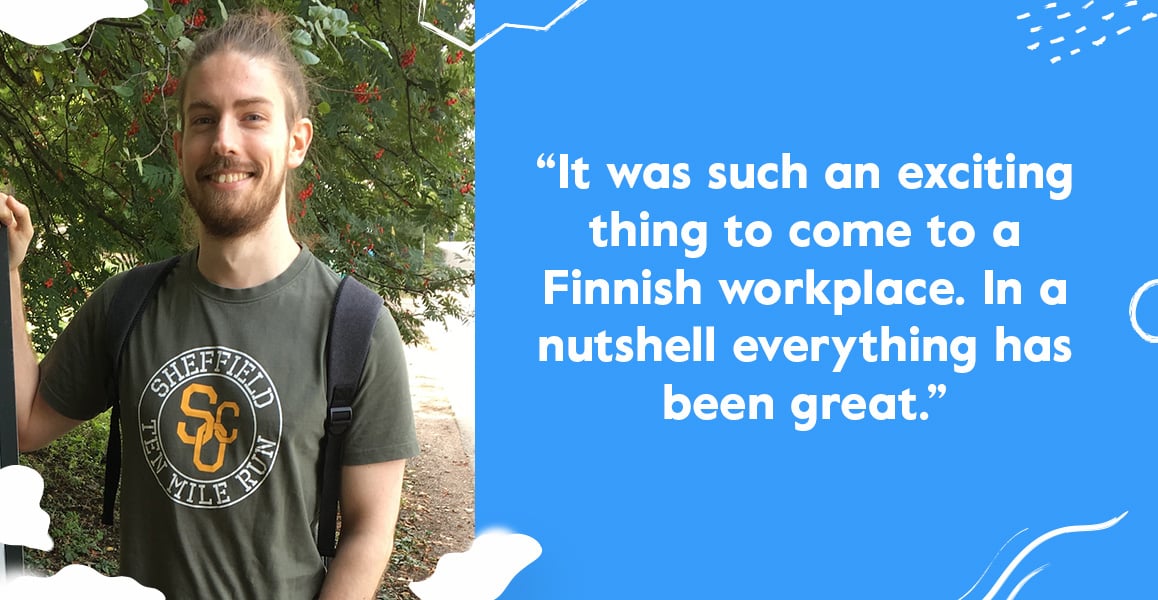 Tamás Tóth, 30, is a Hungarian Mechanical Engineer working for ABB Motors and Generators as a Mechanical Designer in Helsinki. Tamás is an exceptional case because he has only lived in Finland for less than a year but is already speaking pretty good Finnish. For Tamás, Finland as a country became fascinating by studying the language. During his studies, Tamás came up with a plan to move to Finland one day for better conditions and job opportunities.“The Finnish language is quite interesting. I became interested of the language at university and studied it for 5 years. You can say that the Finnish language brought me here”, says Tamás.

Tamás, a Mechanical Engineering graduate, had accumulated work experience in his home country. He designed kitchen equipment and worked in a tire factory where he designed and developed pilot production of tires. Tamás has also became familiar with installation field when he did his apprenticeship working in Polish workshop.

Tamás, who was fascinated by Finland, found an interesting job opportunity in Helsinki by Barona and decided to apply. Tamás did not have much specific job experience for the job, but after discussing with Barona's recruiter, Tamás was offered another more suitable position from ABB. This time as a Mechanical Designer. A face-to-face job interview was agreed and after meeting Barona’s recruiter, Tamás proceeded to a follow-up interview with ABB.

“I think Barona and ABB liked the fact that I had a little bit of coding background through my Linux hobby”, says Tamás from the interviews.

The interviews finally went so well that Tamás got a job offer and a couple of weeks after the interviews, Tamás started in his new job in Helsinki. Now working there for half a year, Tamás has been very pleased with his situation.

“It was such an exciting thing coming to a Finnish workplace. In a nutshell everything has been great. In all my previous jobs, I have never got a feeling that I can’t wait to get to work in the morning”, says Tamás.

Tamás' job in ABB is to design different types of engines and their components to meet customer’s needs. Tamás works with his team or with a co-worker to design the best solutions for the customer's needs. The work is very interesting and Tamás says it is very instructive:

“I have a big curiosity for mechanical things inherited from my father. And there's a lot to learn in this job.”

Six months as a Barona employee has been positive time for Tamás. He says that the employment matters are well organized and, for example, in the case of illness, he can easily get medical visits to the private health sector.

Tamás’ employment is coming to an end with Barona, but he will continue doing the same job because he got a new contract with ABB. When he initially applied for the jobs, Tamás had some doubts about his chances of getting one because he doubted that his knowledge of Finnish isn’t strong enough. Tamás would like to thank ABB for believing in him. He also thanks Barona’s professional recruiter for proposing a new job and starting his career in Finland:

"It was really great that the Barona recruiter could think of a job that suited me based on my work experience."

Even without knowing any Finnish, there are many opportunities in Finland for those who use English as working language.

Barona’s Engineering team specializes in the recruitment of engineering and technical experts. The team recruits manpower for multi-level industrial jobs. Barona as one of the largest employers in the industry sector in Finland offers excellent opportunities for both white- and blue-collar workers to gain momentum for their careers.

Barona's recruiters provide personalized career coaching and sparring assistance to anyone working for Barona. Our goal is to support you at different stages of your career. We also give the opportunity to find a job through direct recruitments to the most interesting companies in the industry.

More on this topic